Summer and warm weather means that everyone is spending a lot more time outdoors, including your pets. Make sure they’re protected from two major pests that are much more active in summer, fleas and ticks.
I’ll start with fleas, because let’s face it, they’re everywhere. If you see one, you should know you’re only seeing part of the problem. Adult fleas live about 50 days, but during that time they’re also laying eggs, creating a lifecycle that can be pain in your pet’s tail – and elsewhere on their bodies. If you notice your dog is scratching more than usual, it could be your first indication that fleas are there. But it’s more than annoying, it could lead to other issues that have an overall affect on you’re pet’s health.
Some of the diseases that could result from flea infestation could include:
Flea Allergy Dermatitis (FAD) – your pet may be scratching or biting excessively around its tail, groin, backside and neck, which can lead to large sores, scabs and bumps.
Tapeworm – If you see your pet scooting along the floor, it may be from intense anal itching or tapeworms around the anal area or in the feces.
Anemia – Your pet is sapped of energy, is weak, lethargic or have gums that are pale.
Rickettsiosis – Your cat may hide the symptoms, but it’s a disease that can be spread to humans.
Cat Scratch disease – Another problem where your cat may not show symptoms but it can easily be spread to you.
Of course, the best thing you can do is make sure your pet is up-to-date on all medications. Annual flea and tick treatments should already be a part of your routine. Check your pet regularly for fleas. Yes, they’re hard to see and they’re fast little buggers. But look for black specks (flea dirt) on both your pet and where it sleeps. Or try placing a wet paper towel underneath your pet as you rub your hands through its fur… if you see black specks, you may have fleas.
Fleas are hard to get rid of and can be expensive if you have to call the exterminator, so make sure you ask your vet about which flea treatment is right for your pet. Also, vacuum a little more often in the summer, wash their beds, blankets and toys they frequently use, and make sure your yard is well maintained. Fleas love grass and leaves, so make sure your yard is mowed and clippings and leaves are raked.
Ticks are beastly little things, the vampires of the insect world. They can be small and hard to spot, but can transmit dangerous diseases that are life-threatening.  Some of these and their symptoms include:
Lyme disease – The most widely known, can be treated by antibiotics. If your pet seems tired more than usual, is lame, has a fever or is not eating, these could be symptoms that indicate your pet needs treatment.
Rocky Mountain Spotted Fever – Fever, lameness, depression, vomiting, diarrhea, loss of appetite and coughing.
Ehrlichiosis – Fever, lameness, depression, lack of appetite.
Babesiosis – a very serious disease that could cause coma or even death. Symptoms include fever, anemia and loss of appetite.
Again, your first step is annual treatments. But you should thoroughly check your pet each day, particularly around the head, neck and paws. These are the tick’s favorite spots. Removing a tick should be done carefully with tweezers, slowly pulling the tick out. It’s a good idea to save the tick in something so you can bring it in when you have your pet treated; we’ll be able to determine the species of tick and more easily determine how to best treat the situation.
Summer is a great time for all, but we have to make sure we protect our pets from the annoying pests that can make them suffer.
Posted by CompleteCareVet at 9:39 AM 3 comments:

Email ThisBlogThis!Share to TwitterShare to FacebookShare to Pinterest
Labels: fleas and ticks

Vampires, Werewolves, Rabies ....And What You Really Have To Fear

By Dr. John Sangiorgio - DVM
www.completecarevet.com
How would you feel about a bunch of Vampires roaming around your neighborhood late at night?  That's what I thought.  Well what about an adorable family of rabid raccoons? Again, not particularly appealing.  But did you know that there is a strong connection between the two?  And that connection may explain modern man's irrational fear of both.
Far far away, and many hundreds of years ago, in what was then called Transylvania (we know it as Romania), at the base of the Carpathian Mountains, in the area surrounding a small hamlet called Walachia, there was what appears to be a particularly virulent and widespread outbreak of rabies. Indeed even to this day, this part of the world regularly suffers from severe occurrences of the disease.  But the one we're talking about just happened to co-inside with the reign of the extremely tyrannical and blood thirsty Vlad the Impaler, a.k.a. Count Dracula, The intertwining of these two events is a perfect example how myth and legend are born.
When it comes to rabies everyone knows the Hollywood basics - like aggression, and an aversion to water.  We think of dogs foaming at the mouth and stumbling around, people screaming, acting hysterical, and running for their lives.  Not much fun at all. In truth, rabies is a complex disorder of the central nervous system, which manifests itself with a wide variety of symptoms.  Here are some that are common to both man and beast:
· Extreme behavior changes including agitation, mania, and outbursts of violence
· Excessive grooming (like a vampire?)
· Loss of grooming (like a werewolf?)
· Hydrophobia, or fear of water
· Photophobia, or fear of light and/or extreme light sensitivity
In humans many of these symptoms and a wealth of others become severe and are readily observed in untreated cases (like those poor unfortunate souls in the middle ages). This plays right into the mythology of many well-known supernatural monsters. And modern science has done the research to prove it!  Dr Juan Gomez-Alonso of Spain became fascinated by the idea and conducted an exhaustive study that was published in 1998 in the highly respected Journal of Neurology.  He discovered some pretty interesting stuff.
For example, people with advanced rabies suffer from severe muscle spasms, not unlike Epileptic seizers, which often causes them to spit up blood.  And photophobia is a factor in these spasms, which can be triggered in a variety of ways including bright light that is reflected in water or by mirrors. Crazily enough they can also be caused by intense odors like garlic.  Ring any bells? Then there's the fact that more than 25% of men with advanced stage rabies exhibit compulsive biting, and an increased frequency of erections and sexual desire.  Put all of this together and boy do you have the makings of a textbook Dracula.
So what does this have to do with us?  As far as vampires and werewolves goes - not much.  But there has been a significant uptick in the last few years in rabies cases in the five boroughs, with 2010 off to a shocking start. Therefore it is very important to be informed. Let's look at the facts.
The worst problem we have had recently on Staten Island was in 2006 and 2007, with a combined total of sixty-four animals, all of which were raccoons and found predominantly around Clove Lake's Park.  In New York City in 2008, nineteen animals tested positive for rabies, four of which were on Staten Island with none in Manhattan.  In 2009, twenty-nine animals tested positive, but only one on Staten Island, a raccoon found on Amboy Road, with twelve in Manhattan, again, in the Central Park area. All of the twenty-nine cases last year were of raccoons.
But while there have not yet been any cases on Staten Island, this year is already very different.  So far Central Park is the epicenter of the problem, with thirty-nine animals that we know of affected since January 1st.  Simply speaking we have had more rabid animals around Central Park so far this year then we have had in any borough in a single year for a long time.  There was even a cat that tested positive in the Bronx. But don't worry, ...seriously.  We're not in the middle ages any more and this hasn’t exactly gone unnoticed by governmental health departments.  So far one federal agency (the USDA), two state agencies, two city agencies, and the Central Park Conservancy are all working together very hard to prevent human exposure and reduce the rate of animal exposure.
So what effect should all of this have on you?  How should you protect yourself and your pets?  It's really very easy.  There's lots of common sense involved.
And most importantly, make sure your pets are up to date with their vaccinations.  In this particular case, an ounce of prevention is worth a lot more than a pound of cure!
If a questionable animal bites you, wild or domestic, stay calm and call the City Animal Bite Phone number at 212-676-2483
And just as a side thought:  I wouldn’t let a new acquaintance kiss me on the neck - for now....
About Dr. John Sangiorgio 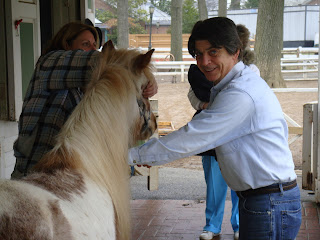 Dr. John Sangiorgio graduated from veterinary school in 1981 in Milan, Italy and has been the Chief Medical Officer of CompleteCare Veterinary Center on Staten Island since he opened it in 1985.  Not only is he widely recognized as one of the premier trauma surgeons in the five boroughs, he served as president of the New York City Veterinary Association and is an advisor to countless city and state officials in policy matters which relate to the welfare of all animals here in our great city.

CompleteCare Veterinary Center continues to break new ground. It's New York's premier veterinary practice with state-of-the-art diagnostic equipment and a team of award-winning professionals, including the 2009 Vet of the Year (Veterinary Medical Association of New York City). Visit www.completecarevet.com
Posted by CompleteCareVet at 6:03 PM No comments:

CompleteCareVet
Named the VMA of New York City's "Veterinarian of the Year" for 2009, Dr. Sangiorgio is also the past president of the NYC VMA and has revolutionized care in our area. He was the first in NYC to offer 24-hour emergency care, as well as in-house chems and digital radiographs in the City. A tireless worker, radio host, author, advisor to government and city officials, he has also been the official vet of the Westminster Dog show since 1997.